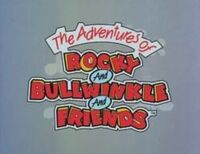 The Rocky & Bullwinkle Show (known as Rocky & His Friends during its first two seasons and as The Bullwinkle Show for the remainder of its run) is an American animated television series that originally aired from November 19, 1959, to June 27, 1964, on the ABC and NBC television networks. Produced by Jay Ward Productions, the series is structured as a variety show, with the main feature being the serialized adventures of the two title characters, the anthropomorphic moose Bullwinkle and flying squirrel Rocky. The main adversaries in most of their adventures are the Russian-like spies Boris Badenov and Natasha Fatale. Supporting segments include Dudley Do-Right (a parody of old-time melodrama), Peabody's Improbable History (a dog and his pet boy Sherman traveling through time), and Fractured Fairy Tales (classic fairy tales retold in comic fashion), among others.

Bullwinkle and Rocky - The Secret Super Sub Coloring Book
Add a photo to this gallery
Retrieved from "https://coloringbook.fandom.com/wiki/The_Rocky_and_Bullwinkle_Show?oldid=4290"
Community content is available under CC-BY-SA unless otherwise noted.